Being presented with the Women in Horticulture Award at the recent Hort Connections Conference in Melbourne was a career highlight for East Gippsland farmer Carmel Ingram.

The Ingram family are well known in the East Gippsland area. Their integrated vegetable production and transport business, Bonaccord, is named after the lane on which the family dairy farm was located.  The business is run by Carmel and her husband Keith, and Keith’s three brothers and their families.

The Ingram family farm near Bairnsdale, in Victoria’s East Gippsland, initially had 20 hectares of land under dairy.  After dipping their toe in the vegetable growing business in 1975, by 1985 they had converted all production to vegetables. Now with over 1200 hectares of fertile, alluvial soils available for vegetable production, the farm is one of Victoria’s largest.

Bonaccord produce all year round and grow a wide range of vegetables from corn and carrots, to broccoli, beans, cabbage, cauliflower, onions, spinach and lettuce.

The Ingrams also run their own transport business, Bonaccord Freightlines, which operate around 45 trucks to transport produce from Bonaccord and other surrounding farms to markets in Sydney and Melbourne.

Running a large vegetable farm requires a lot of labour and the Bonaccord farm is no exception, with over 260 workers on site at peak times and up to 140 in the pack-house alone. This is where Carmel steps in as pack-house manager. Carmel is responsible for managing all areas of grading, assessment, cutting, washing and packing of produce. She oversees a team that includes a large number of local residents as well as visa holders from a diverse range of countries.

One of Carmel’s key tasks is coordinating the roster. It was here, 25 years ago, Carmel recognised the need to provide flexible working hours to those employees that also had to juggle the school pick-up and drop-off.

While other growers find difficulty in sourcing sufficient quantities of reliable, dedicated workers, Bonaccord work hard to ensure they are regarded as a good place to work. They leverage off this reputation to ensure that they attract and retain good workers. “It’s no accident that people keep approaching us to work here” said Carmel, “we treat our workers like family and are rewarded by having a large number of long-serving, dedicated employees”.

“However, unfortunately there aren’t enough local workers available to fill all of our vacancies so we need to source workers from a wider pool. The Seasonal Worker Programme has worked well for us for the last five years. We have 20 workers from Timor-Leste  that are good reliable workers who return each year with the assistance of MADEC. We also use the Harvest Trail, our own website, and word of mouth to get access to visa workers from all over the world. People say we’re lucky to have a good workforce, but it’s not luck, we pay our workers correctly and look after their needs with things such as flexible working hours” said Carmel.

For Carmel the Women in Horticulture Award came as a pleasant surprise, but she was delighted to see that her efforts to support and mentor other women to pursue and succeed in their horticulture careers had been recognised.

For Carmel, this extends to her day-to-day routine, whether it’s passing on her instilled values and work ethic to the pack-house team, or supporting primary and secondary college students to gain exposure to life on her farm. 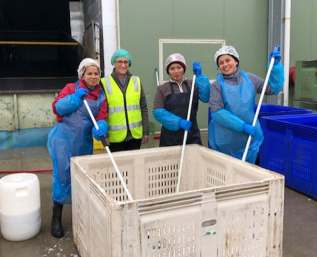